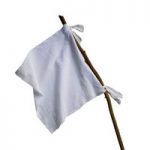 To Be a True Disciple of Jesus (Y'shua), You MUST BE Sold-Out.
Total Surrender. It's All or Nothing.

Jesus (Y'shua) said you cannot be his disciple unless you love him more than anyone or anything (Luke 14:26-27) - that in order to save your life you must totally and completely surrender it to him, without holding back (Mark 8:34-38).  It is literally an "all or nothing" deal.

COMPLETE and TOTAL SURRENDER is the ONLY WAY to follow Jesus (Y'shua).

You must transfer ownership of all that you are and all that you have to Jesus (Y'shua) to prove your faith in him as Lord of Lords and King of Kings.  Everything is no longer about you, your time, your will, your plans - it can only be about his.  It is no longer your money, your possessions, it is his.  It is no longer about your life, your future, it is all about his.  Then and only then can you step into the abundant life and begin to walk as a true disciple (follower).

In Luke 14:33 Jesus (Y'shua) states:
"So then, none of you can be My disciple who does not give up all his own possessions."

Also in Mark 8:34-38 Jesus (Y'shua) says:
And calling the crowd to him with his disciples, he said to them, "If anyone would come after me, let him deny himself and take up his cross and follow me. For whoever would save his life will lose it, but whoever loses his life for my sake and the gospel's will save it. For what does it profit a man to gain the whole world and forfeit his soul? For what can a man give in return for his soul? For whoever is ashamed of me and of my words in this adulterous and sinful generation, of him will the Son of Man also be ashamed when he comes in the glory of his Father with the holy angels."

Jesus (Y'shua), while looking up to the Heavenly Father, said in John 17:3:

“And this is eternal life, that they might know[G1097] you the only true God, and Jesus Christ, whom you have sent.”

In the Bible, God reveals there are rules that govern our relationship with him. In not following these rules (sinning) WE ARE the ones that are breaking fellowship with God.  Continuing to do so will lead to death.  John, an original disciple of Jesus (Y'shua), writes in the New Testament in 1st John 2:3-4:  “And hereby we do know that we know[G1097]  him, if we keep his commandments (from the Old Testament).  He that says, I know[G1097] him, and keeps not his commandments, is a liar, and the truth is not in him.”

John states in 1 John 3:4,6 :  “Whosoever commits sin violates also the law (Torah): for sin is the violation of the law (Torah). … (6)  Whosoever abides in him (Jesus/Y'shua) sins not: whosoever sins has not seen him, neither known him.”

Testimony of a 30+ Year Sold-Out Disciple

Could it be the biggest lie we have bought into, has become the main stumbling block to the very thing that God wants us to do:
Obey God as he clearly commands in the entire Bible (Old and New Testaments)?

DAVE ROGERS
Hebrew Roots Radio is meant to encourage others in their walk with Jesus (Y'shua). I consider the music played here some of the best reflecting over 30+ year in my journey as a Sold-Out Disciple of Jesus (Y'shua). My entire life I have been involved in ministry.  Raised in the Southern Baptist community along the Mississippi Gulf Coast by parents who are both ministers and also served in missions work, I served as a Southern Baptist minister myself for over 15 years, worked on the Coast in Christian Radio for over 20 years, and have also worked in Pro-Family and Pro-Life work for over 25 years.

One of the biggest issues that had stunted my growth early on was a misunderstanding of the purpose of the Torah (God's Law).  While traditional churches said to run away from it, that it has no purpose anymore, that we don't need to obey it because it is old and one away with -- I learned obeying God's Law (Torah) is the central core and foundation to the success of every disciple's walk.  That yielding to God, submitting to him in obedience - having a child-like faith in trusting him and his commands - this was the core to allowing God to transform me, to mold me, to re-make me in his image.  Embracing obedience of God's commands in the entire Bible (Old and New Testaments) without arguing, just trusting and obeying: This became the basis of a personal revival - an absolute super-nova explosion and exponential growth in my closeness with and understanding of God and the Bible.  I had truly gone to the next level I thought.  I had finally found my true home with God, where I and all disciples were always meant to be.  What I had discovered is that, in fact, this was the original level: the foundation.  I had discovered the pure, original Gospel and teachings of the Early Church, I had found the original foundation to the faith.

By Boldly Embracing Obedience to God's Law (Torah) I was, in fact, Following in the Direct Footsteps of Jesus (Y'shua) as he commanded us to.  See, those who follow the original teachings of Jesus (Y'shua) and the Early Church don't keep the Torah (the law) to be Saved; We keep it because we are Saved.  We do this because the very definition of sin is the violation of God's Law (the Torah) and Obedience to God is how we please him.  WALKING IN THE SPRIT: We choose to obey the Law of God (in the power of God's Holy Spirit) willingly because we choose to not sin.  We choose not to offend God.  Continuing to sin against anyone, a friend, family member, or God will result in you breaking fellowship with them.  Now can you see how important obedience is?  Just as Jesus (Y'shua) obeyed the Torah (God's Law), we also seek to obey the Torah because he taught that to be a true disciple of his we must follow in his footsteps and live as he lived.  What Would Jesus Do?  Obey the Torah (Laws of God).  What Did Jesus Do?  He Obeyed Torah.

INTRODUCTION to Torah. Why We Need to Keep God's Laws

WHAT IS TORAH?
Torah is the first 5 books of the Bible, sometimes called the Books of Moses: Genesis, Exodus, Leviticus, Numbers, Deuteronomy. Torah is often translated in English as "the word" or "the law" but in Hebrew it means 'instructions' or 'teachings' and is considered God's Instructions or Teachings throughout the entire Bible with the first 5 books as the foundation to the faith.

Many of us were taught by traditional Christian Churches that Jesus (Y'shua) did away with God's laws in the Old Testament and that we are not supposed to obey them.  What are God's Laws except the clear commands, wishes, and Will of God?  Has faith now become a license to sin, to not to obey God?!  Has faith in Jesus (Y'shua) become a license to murder, steal, commit adultery?  I think not.  God forbid!  God's Laws ARE NOT DONE AWAY WITH - this is clear.  So what role exactly does God's Law have?  It is clear that Salvation comes only by Faith in Jesus (Y'shua), but then how are we to live our daily lives?  How do we walk?  We obey God and his commandments in the entire Bible, Old and New Testaments.  You have heard that the Bible is an instruction manual for life.  How so true this is!

As history records, the Early Church for the first 400 years observed the Torah (God's Law) and taught it as the foundation for every disciple of Jesus (Y'shua) to live by.  While salvation comes only by faith, living in that faith comes only by obedience to God - for faith without works is dead (James 2:14-26).

Why would traditional churches be trying to keep us from obeying God's Instructions?  The point of a disciple is to focus on the commands of our master, Jesus (Y'shua), for it is through him alone that we have our salvation, not through any church, denomination, or leader.